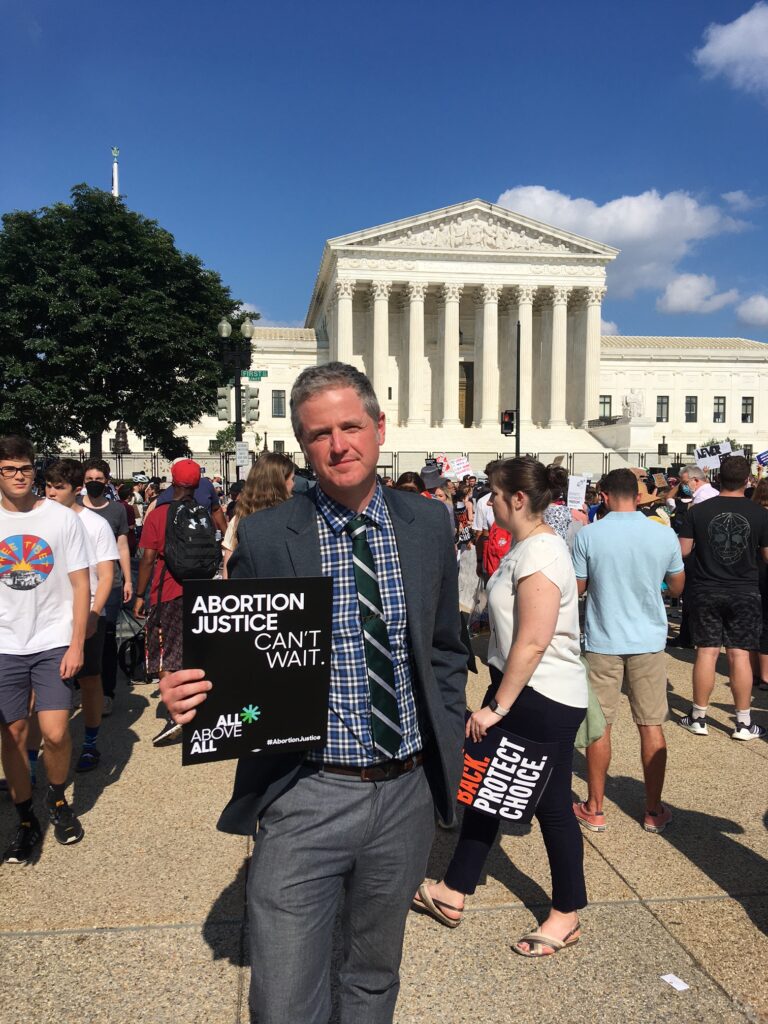 On the morning of June 24th, I caught an early morning flight from Portland to D.C. for work. By 9AM, I had settled into my hotel to catch my breath, make a cup of coffee, and prep for a busy day of meetings. Only an hour later everything changed—the Supreme Court released its opinion in Dobbs, undoing decades of precedent and putting women’s rights in jeopardy all over our country.

Finding myself less than two miles from the Supreme Court at this historic moment, I quickly rejiggered my day and walked with a friend to join as protesters began to gather. The scene that greeted us was one of shock and dismay—but also unwavering resolve.

Let’s be clear—women’s rights are in jeopardy here in New Hampshire and we cannot afford complacency. Along with my fellow Democratic candidates, I bring that spirit of resolve I saw in D.C. forward as we seek change in Concord. I’m proud to join as a co-signer of the joint statement below.

The decision to override Roe v. Wade has led many Granite Staters to wonder what the future of women’s reproductive rights will be in N.H.
As it currently stands, N.H. law allows abortions up to 24 weeks, and after that only for fatal fetal anomalies and for the protection of the life of mother. However, providers who violate the law can be imprisoned for up to seven years and face a fine of up to $100,000.

While we are not yet one of the roughly 25 states that have sought to outlaw abortion, we cannot be complacent in the belief that this could never happen here.

As the Democratic nominees for state and county office, we are concerned about women maintaining their rights to make their own reproductive decisions.

We do not believe that the state legislature should position itself in doctor’s offices as surrogate physicians to make decisions that rightfully belong to a pregnant woman and her medical team, family  and spiritual advisors.

In 2021, a Republican majority passed a budget with an abortion ban thrown in for good measure. This legislation, which does not belong in a financial roadmap of the state, initially provided no exceptions for a fetus that could not survive outside the womb and included an invasive ultrasound mandate at all stages of pregnancy. Gov. Chris Sununu, who has claimed at various times that he is both pro-life and pro-choice, signed the bill.

The Executive Council voted to withhold funding for health centers that not only provided abortions, but which offered reproductive care and other health services for women. These facilities are very important for testing and treatment of STDs and for low-cost contraception.
Executive Councilor Joe Kenney voted to withhold these funds; he voted twice to defund Planned Parenthood, even though state auditors found that no New Hampshire state dollars were used for abortion care.

Executive Councilor Cinde Warmington was the lone vote on the council to fund these services.

The House Majority Leader, Jason Osborne, recently stated that protests and dismay over the Roe v. Wade decision represented “grandstanding over the outrage du ‘jour.” This is a flip and arrogant characterization of the anger that women are experiencing all over the state and nation over the loss of constitutional freedoms that women have had in this country for 50 years.

Make no mistake about it, the state legislature, which is currently under the control of the majority party, is not done restricting the cherished rights that women have had in this country for the past half century. Pregnant teenagers who can barely take care of themselves will be forced to give birth to babies they cannot support and will suffer medically from giving birth too young. Families who are struggling to feed their families will be overwhelmed with the need to care for another child. Women will die as they turn to unlicensed and unscrupulous providers or attempt to abort on their own. And physicians will be left with the agonizing decision as to whether they will do what is right for their patient or be at risk to go to jail, pay an enormous fine, or even lose their medical licenses. Women in our districts are asking, what can we do to ensure that our right to make decisions about our own bodies will not be taken away?

The best way to do this is to ensure that candidates who are pro-choice are voted into office in 2022. This means not simply voting for the candidates for governor or the U.S. senate or Congress but voting up and down the ballot. This includes candidates for the N.H. House of Representatives, the N.H. Senate, for the Executive Council, and for County Commissioner. Ask candidates where they stand on this important issue before you vote for them.

It also means moving out of your comfort zone and getting involved with and helping pro-choice candidates get elected. You can do this by working with your town or county political committee, door knocking for your candidate of choice, writing letters to the editor, or making a financial contribution.

We are your slate of Democratic candidates for public office in Carroll County in 2022. We pledge to work to ensure that a woman’s right to make her own reproductive decisions is not left to a legislative body that has wedged itself into doctor’s offices to take control of life altering decisions for women.

Your vote and support are the single best way to keep out of office those who want to make these decisions on your behalf.